Living by a moral code is important but trying to legislate that code is madness. It’s not a law that stops people killing each other, it’s common human decency and basic logic. Laws don’t stop psychopaths anyway, they just legislate the brutal punishment of those who get caught and reinforce a psychotic attitude towards problem solving.

I knew a guy who had been a bit of a troubled youth. He was a die hard shoplifter. In spite of various state imposed punishments he was lucky enough to see the errors of his ways and changed his behaviour to become a trustworthy and dependable man. When I asked him why he changed tack, he said that even though he could conjure up justifications in a heartbeat, he knew in his soul that being dishonest wasn’t working for him. When I asked him how he turned down such a profitable habit, he said he didn’t really know …he just didn’t want to be doing that any more. It didn’t make him feel good about himself. It had nothing to do with the fear of being caught or punished and everything to do with personal redemption.

When we legislate we IMPOSE on others. Sometimes this imposition looks like it’s FOR THE GREATER GOOD but I urge you to consider the price of such actions. It is untrue that the law stops violence and theft because it uses violence and theft as weapons.

People are generally good and when they are not it is usually due to a reaction with their harsh surroundings and/or some form of alienation. Remember,  some people are more sensitive/unaware, clever/foolish, brave/insane than others and legislating things (rude forceful behaviour) will not actually keep people safe from harm. It’s mostly about revenge and doesn’t help endorse our better natures. Fear never helps endorse our better natures.

Equality is ensuring individuals or groups of individuals are treated fairly and equally and no less (OR MORE) favourably in areas of race, gender, disability, religion or belief, sexual orientation and age. People are not all the same (and that is a fact) which is why equality is important.

Arbitration is the hearing and determining of a dispute or the settling of differences between parties by a person or persons chosen or agreed to by them.

A lawyer who has made a name for himself by losing elections by spectacular margins has announced he will be contesting the Auckland mayoralty and Mt Roskill by-election simultaneously.

The fact the mayoral and a possible by-election will not be held simultaneously does not bother Adam John Holland, who describes himself as “kind of an anarchist”.

He is standing as a Not A Party candidate and encouraging people not to vote.

“It is my belief that the role of an elected official ought not to impose one’s own views and laws on the people, but rather to stand down immediately and allow local communities to build and grow naturally,” Mr Holland said.

He has stood for office three times for a total of 57 votes.

His other two forays were in the Ikaroa Rawhiti by-election in 2013 and the Christchurch East by-election in the same year, in which he drew 15 and 31 votes respectively.

Mayor Len Brown is not seeking a third term.

Today I am very proud to be selected by Not A Party to contest the Auckland Mayoralty Election and the 2016 Mount Roskill By-Election simultaneously.

As in previous elections, these will likely play a pivotal role in determining how Aucklanders don’t necessarily choose to live their lives. By electing a Not A Party candidate, Aucklanders will have a well deserved opportunity at self-governance, rather than a monolithic, imposing, oppressive local government.

Aucklanders deserve to have the best possible mayor, and if successful in my bid, I will donate every last penny of my salary to various charities as suggested to me by the people of Auckland. I won’t do a single thing as mayor just as I haven’t done a single thing for the past seven years of my retirement. Decisions shall be left up to the people, not an elected official in a farcical ”democratic” ceremony.

I will be working hard all year to show Aucklanders that I can be that mayor. A non-official mayor who is engaged to the community, approachable, stands up for local people in times of difficulty, and represents not a single view of my own when in office. It is my belief that the role of an elected official ought not to impose one’s own views and laws on the people, but rather to stand down immediately and allow local communities to build and grow naturally.

In working together within our community, we can all ensure excellent policy on the most local level possible that allows people to get on with building prosperous families, businesses, and lives.

Voting is not a victimless crime …
Not A Party recommend doing something more productive on voting day. 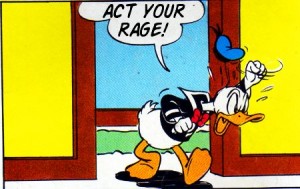 After years of voting against the right wing and being let down by the left I decided to get back to my roots and not vote at all. I was not surprised with the response from some of my friends … “Huh? But isn’t that just ensuring that National will get in again?” Yes, well … I just can’t go on consenting to be governed any more. And to say that someone who hasn’t voted is responsible for a political party being voted into power is an insanely thin way to try and send me on a guilt trip.

As I knew in my youth, and then came to realise all over again, the democracy dance is a deceitful illusion where the state always wins and then—that’s all folks. See you next time! After that the voting population get to see what they bought into. It really is such a low level of participation that allows us to be ruled over by an elite of professional “nice guys” whose job it is to tell people what they want to hear, and feign empathy. When I endorsed the Government by voting against it I felt like I was being played for a fool. The only way around this attack on my mental health is to refrain (hard) from voting for the empty promises of politicians who don’t represent me in any way.

It would seem that voting is only useful if you think the same things as everyone else, but that negates the need to vote.