Larken Rose is an anarchist author best known for challenging the IRS to answer questions about the federal tax liability of citizens, and being put in prison with no questions answered. 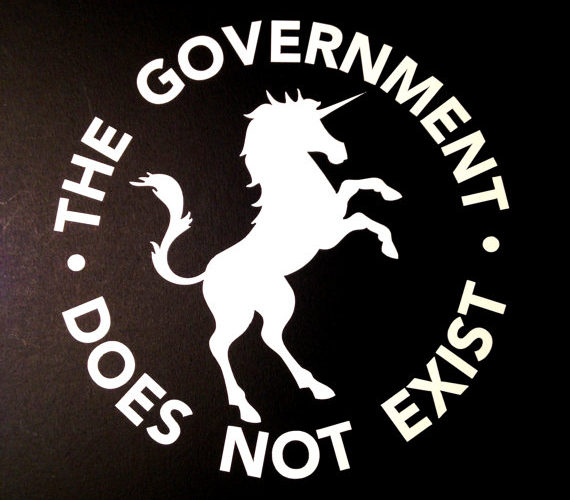 Most people believe that “government” is necessary, though they also acknowledge that “authority” often leads to corruption and abuse. They know that “government” can be inefficient, unfair, unreasonable and oppressive, but they still believe that “authority” can be a force for good. What they fail to realize is that the problem is not just that “government” produces inferior results, or that “authority” is often abused. The problem is that the concept itself is utterly irrational and self-contradictory. It is nothing but a superstition, devoid of any logical or evidentiary support, which people hold only as a result of constant cult-like indoctrination designed to hide the logical absurdity of the concept, It is not a matter of degree, or how it is used; the truth is that “authority” does not and cannot exist at all, and failure to recognize that fact has led billions of people to believe things and do things that are horrendously destructive. There can be no such thing as good “authority”– in fact, there is no such thing as “authority” at all. As strange as that may sound, it can easily be proven.

In short, government does not exist. It never has and it never will. The politicians are real, the soldiers and police who enforce the politicians’ will are real, the buildings they inhabit are real, the weapons they wield are very real, but their supposed “authority” is not. And without that “authority,” without the right to do what they do, they are nothing but a gang of thugs. The term “government” implies legitimacy – it means the exercise of “authority” over a certain people or place. The way people speak of those in power, calling their commands “laws,” referring to disobedience to them as a “crime,” and so on, implies the right of” government” to rule, and a corresponding obligation on the part of its subjects to obey. Without the right to rule (”authority”), there is no reason to call the entity “government,” and all of the politicians and their mercenaries become utterly indistinguishable from a giant organized crime syndicate, their “laws” no more valid than the threats of muggers and carjackers. And that, in reality, is what every “government” is: an illegitimate gang of thugs, thieves and murderers, masquerading as a rightful ruling body.

(The reason the terms “government” and “authority” appear inside quotation marks throughout this book is because there is never a legitimate right to rule, so government and authority never actually exist. In this book such terms refer only to the people and gangs erroneously imagined to have the right to rule.)

All mainstream political discussion – all debate about what should be “legal” and “illegal,” who should be put into power, what “national policy” should be, how “government” should handle various issues – all of it is utterly irrational and a complete waste of time, as it is all based upon the false premise that one person can have the right to rule another, that “authority” can even exist. The entire debate about how “authority” should be used, and what “government” should do, is exactly as useful as debating how Santa Claus should handle Christmas. But it is infinitely more dangerous. On the bright side, removing that danger – the biggest threat that humanity has ever faced, in fact – does not require changing the fundamental nature of man, or converting all hatred to love, or performing any other drastic alteration to the state of the universe. Instead, it requires only that people recognize and then let go of one particular superstition, one irrational lie that almost everyone has been taught to believe. In one sense, most of the world’s problems could be solved overnight if everyone did something akin to giving up the belief in Santa Claus.

Any idea or proposed solution to a problem that depends upon the existence of “government,” and that includes absolutely everything within the realm of politics, is inherently invalid. To use an analogy, two people could engage in a useful, rational discussion about whether nuclear power or hydroelectric dams are the better way to produce electricity for their town. But if someone suggested that a better option would be to generate electricity using magic pixie dust, his comments would be and should be dismissed as ridiculous, because real problems cannot be solved by mythical entities, Yet almost all modem discussion of societal problems is nothing but an argument about which type of magic pixie dust will save humanity. All political discussion rests upon an unquestioned but false assumption, which everyone takes on faith simply because they see and hear everyone else repeating the myth: the notion that there can be such a thing as legitimate “government.”

The problem with popular misconceptions is just that: they are popular. When any belief – even the most ridiculous, illogical belief – is held by most people, it will not feel unreasonable to the believers. Continuing in the belief will feel easy and safe, while questioning it will be uncomfortable and very difficult, if not impossible. Even abundant evidence of the horrendously destructive power of the myth of “authority,” on a nearly incomprehensible level and stretching back for thousands of years, has not been enough to make more than a handful of people even begin to question the fundamental concept. And so, believing themselves to be enlightened and wise, human beings continue to stumble into one colossal disaster after another, as a result of their inability to shake off the most dangerous superstition: the belief in “authority.”

The Most Dangerous Superstition