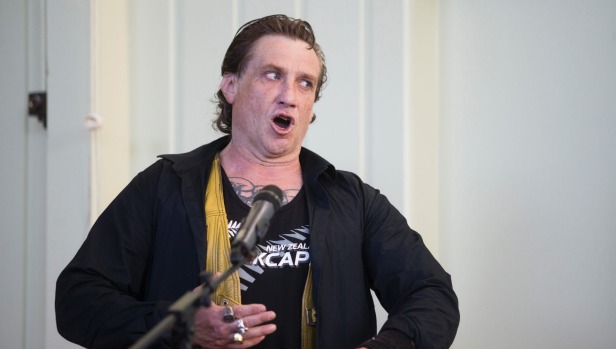 Frustrated by the feeble responses from local law enforcement to requests for help cleaning out crystal methamphetamine dealers from their community, a street gang made up of mostly underprivileged youths takes the problem into their own hands with immediate and complete success, decommissioning a dozen meth houses within 24 hours. Something from the fringes of a dystopian cyberpunk novel like The Verity Key, set in the 2070s? No – this is the small rural Waikato town of Ngaruawahia, population 5,000, in 2016.

Achieving this was possible because the locations of and locations from which the dealers sold were all known. All it took was a public meeting organised by Tribal Huk President Jamie Pink (pictured above), at which he stated that crystal meth dealers had 24 hours to leave Ngaruawahia or they would be physically removed from the town.

This throwing down of the gauntlet has apparently resulted in a town free of dealers of the drug. The question then becomes: why could the Police not have done this?

The least secret reason is that the Police are the army of the rich, and the residents of Ngaruawahia do not make large tax contributions to the upkeep of the New Zealand Police force. Like all poor communities, therefore, they are of the lowest priority for protection by law enforcement.

Moreover, the rich generally do not have problems with P dealers making offers to their sisters and daughters as the rich drink alcohol.

The main reason, however, is this. The Tribal Huk actually has more community support among the disadvantaged than the New Zealand Police. This is a fact widely known and accepted by the poor whose neighbourhoods house the crystal meth dealers, and is much less understood by the wealthy.

The Police are not considered by the poor to be on their side because they put the poor in prison for cannabis offences, and because they give the poor car fines to keep the roads clear for the rich.

In New Zealand the Police are like an occupying army if you are a cannabis user. Distrust is the natural consequence of the accumulated fear brought on by the possibility that the Police might aggress against you in the enforcement of cannabis laws.

This community support might be a result of the Tribal Huk’s successful ongoing efforts to feed over 500 Waikato schoolchildren, something that the Ministry of Education has not been able to achieve. The Tribal Huk deliver their sandwiches to 25 different schools within the region.

There are no national food in schools programs in New Zealand because we don’t want to pay taxes to feed other people’s kids. There is not sufficient solidarity in New Zealand for such a thing to be acceptable.

Pink himself, in the article linked above, refers to the link between feeling hungry and feeling angry, something that is obvious to any poor child but is a lesson from another dimension to the crusty, distant old men who make decisions in this country.

Anyone with any sense knows that if you are a hungry child, being told to sit down in a classroom on concentrate on anything other than food is going to make you angry. Few adults could handle such a thing without anger.

And yet, despite a full stomach being absolutely necessary if a child is going to learn anything meaningful from school, the New Zealand Government has failed to provide something as simple as sandwiches.

Perhaps the Tribal Huk should have some Police and Ministry of Education funding diverted their way?

The conclusion appears to be that government works best when there is sincere mutual support with the people it governs, and the precise structure or ideology of that government is, next to this, unimportant.

Another way to put this is that government will only work when there is sufficient solidarity between the people being governed and the people doing the governing, and this is true whether the power structure involves the State or a local street gang.

Why are the Tribal Huk More Effective Than the New Zealand Government?